Doc Krishna Mohan sighed. I knew it was not a good sign, but I was used to it. He would take our readings every day that we were at Base Camp, but I noted it down in my diary just the one time: he was only confirming what I had known all my life - that I was no athlete. In school, I would trail behind all the other boys in the simplest of races, and therefore I never took any interest in competitive sports. Hiking and climbing mountains (or at least trying to!) appealed to me as a form of Do It At Your Own Pace activity which would not embarrass me in public. I know that climbers can be extremely competitive in their own way, but I certainly did not belong in that category. At the same time, was I being presumptuous to tackle mountains perhaps I should not even be near to? The motivation to climb is very hard to pin down: it is based on personal feelings and perceptions and fuelled by individual desire. For me, personally, the location of a peak played perhaps a greater role than its difficulty in being chosen for a visit. A little off the popular list, a little less attempted, not too remote (if I had all the time and resources in the world, this would not be an issue!) - these were attributes I looked for when planning a mountain holiday. I may not have been very successful as far as climbing to the summits was concerned, but I always came away with a sense of having spent a few weeks in stunning landscapes with close friends and having experienced that high that only big mountain elevations seem to dispense to their devotees.

Over the next couple of days we had managed to establish a camp at the foot of the Brahmmah ice fall. The route crossed the interminable moraine of the Brahmmah glacier diagonally from Base Camp and then ascended the last stream flowing into the glacier from the other side. This gave us access to a beautiful ablation valley where we could rest from our labours briefly amongst the wildflowers and the tarns that adorned its hollows. 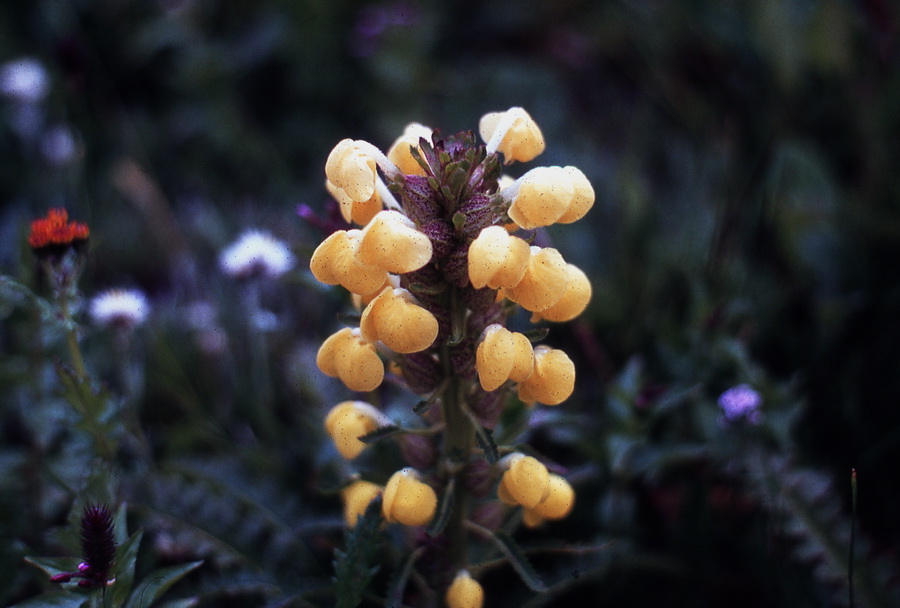 From here we turned into the southern cwm of the glacier and were instantly confronted by the sight of the towering wall of the ice fall which cascaded from the peak. The summit soared up for about 7000 feet above the Advance Base Camp as we chose to call our small cluster of three tents. Initially the south east ridge plummeted sharply  from the summit for about a thousand feet before being brought to a halt by the three prominent rock pinnacles. From here, the ridge descended rather more gently to the col between Flat Top and Brahmmah. Our goal was to place a camp on the col, just as all our predecessors had done. To gain the col, we planned to more or less follow the route pioneered by the first exploratory Cambridge-Indian Kishtwar Expedition in 1965.

However, the best laid plans of mice and men and mountaineers do go awry : we had to contend with my sudden bout of fever, Kamlesh's painfully blistered feet, and Faruk's leg injury which sent him scurrying to Base Camp for a rest. Fortunately, bad weather also moved in, justifying the hiatus in our activities. In the meantime, two Australian brothers (Tim and James Strohfeldt) had arrived at Base Camp; they were hoping to ascend Brahmmah via its North East ridge route where a couple of years earlier some Japanese climbers had perished. They also wished to climb the Eiger and would spend days gazing at its steep granite walls with their binoculars while listening endlessly to their Walkmans : they had no power problems as they had come equipped with portable solar chargers for their Handycams and other gadgets. We, on the other hand, had to coax life out of our batteries by regularly inserting them into our armpits!

There were other differences between them and us. While they apparently had quite substantial experience in lightweight alpine style and big wall climbing, our motley crew were all amateurs united only by a common love of the mountains. Our climbing style was cumbersome and burdened with too much weight. And our relatively lower levels of fitness and climbing skills put the "Fast and Light" style probably out of our reach. However, adequately nourished by Shashi's great cooking, we soldiered on and after a series of hiccups, Faruk and Harsha occupied the col camp on 5 Sept. They had taken 9 long hours from our Advance Base: we had watched them all day ploughing up the interminable slope, Faruk finally breaking through the cornice on the top and disappearing from our sight.

Two days later Ravi and I took an hour longer to do the same stretch! We were caught halfway in a snowstorm. Ravi wanted to stop and camp but the prospect did not appeal to me as we had no stove! I reasoned with him that all we had to do was follow our friends' footsteps. Even so, it was a memorable day. Here is an extract from my journal: "...we started off at 1430 (we had left Advance Base at 0900) up the ever steepening slopes in the ever increasing whiteout....It was 1900 hrs by the time we dragged ourselves to col camp, tired, exhausted, stunned into utter silence by the cold. Faruk made some drinking chocolate which brought back life to us."

The col camp was fabulously situated: to the south we could look down into the Kibber Nullah. To our left the ridge went snaking up towards Flat Top whilst to our right the south east ridge of Brahmmah could be viewed almost head on.


Three and a half thousand feet separated us from the summit. In August 1973, Chris Bonnington and Nick Estcourt had reached the summit in nine hours of climbing, bivouacking on the way down at approximately 20,000 ft. Not considering ourselves in the same league, we decided to establish another camp a little higher on the ridge from where we hoped we would stand a better chance of reaching the top. We found traces of old fixed ropes in many places, evidence of the passage of past climbers. 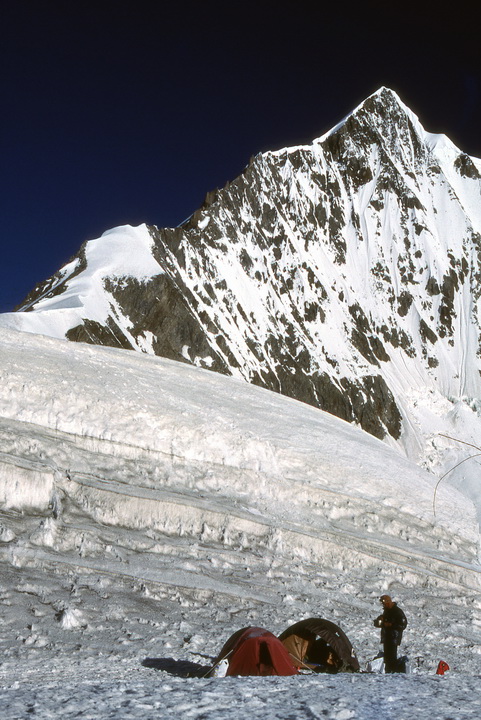 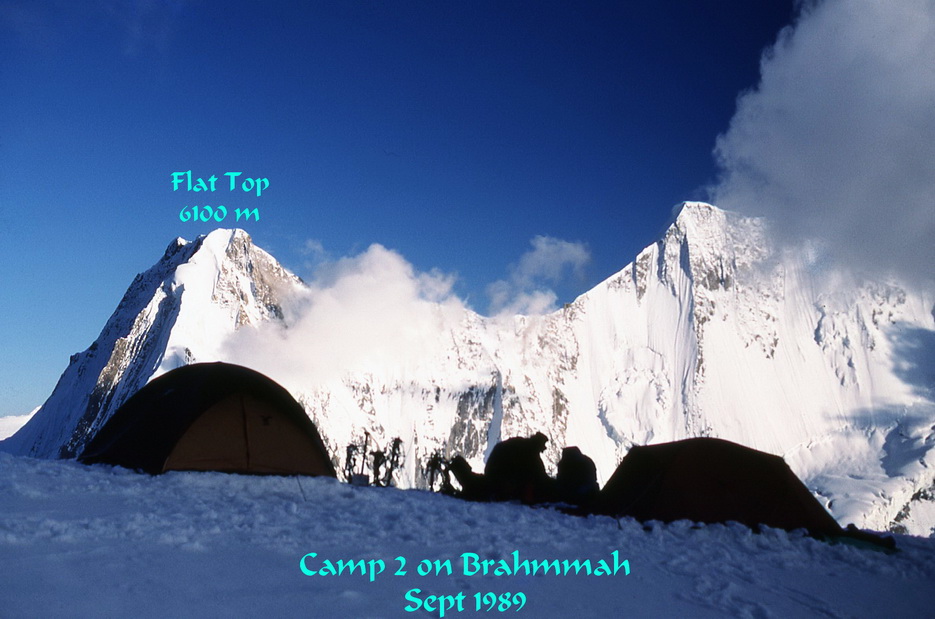 It was already three weeks since we had arrived at Base Camp; and only two weeks for Ravi who had joined us later due to his business commitments. We had had our fair share of setbacks and rain and snow and illness and injury. But as 13 Sept dawned, we felt that all that was behind us and that the gods would finally relent. We prepared to push for the summit and were set to bivouac either on the way up or down. The dawn sky emerged clear, but this was deceptive. As we reached the first of the rock towers on the ridge the western horizon changed rapidly, massing dark cumulus clouds. Snow pellets began to rain down on us and soon flakes began to fall all around us as we groped our way on the rock. Visibility began to fade and with it our hopes as well. We were cold and tired and exhausted after weeks of effort. As the snow accumulated on the ledges and spindrift blew into our nostrils we deemed that retreat was the logical decision. Self preservation is a great instinct and perhaps this prevented us from being out on a limb on very steep terrain where misfortune could so easily have befallen us. 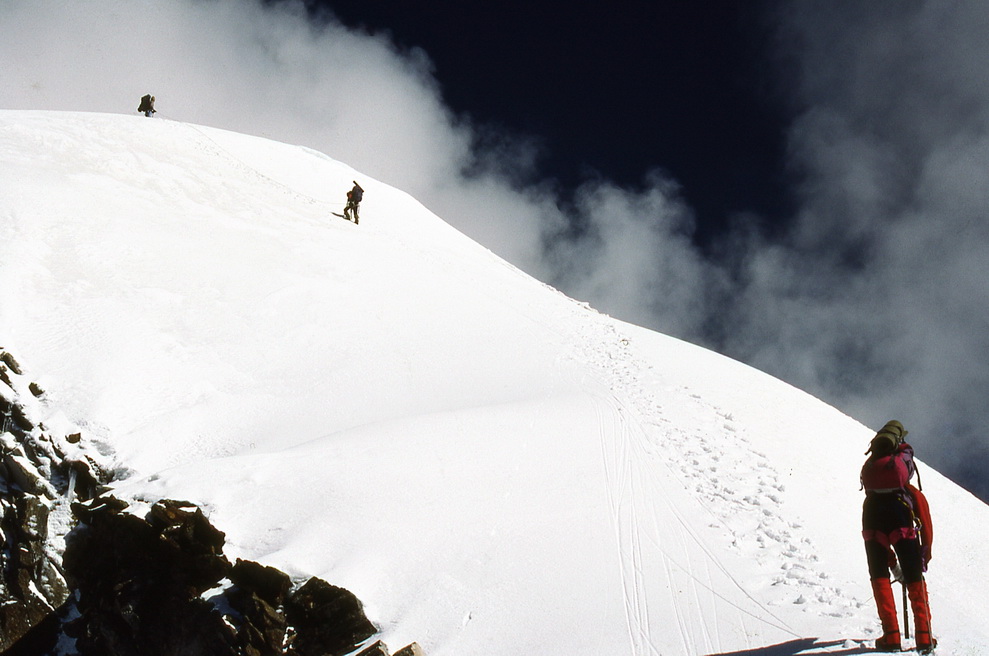 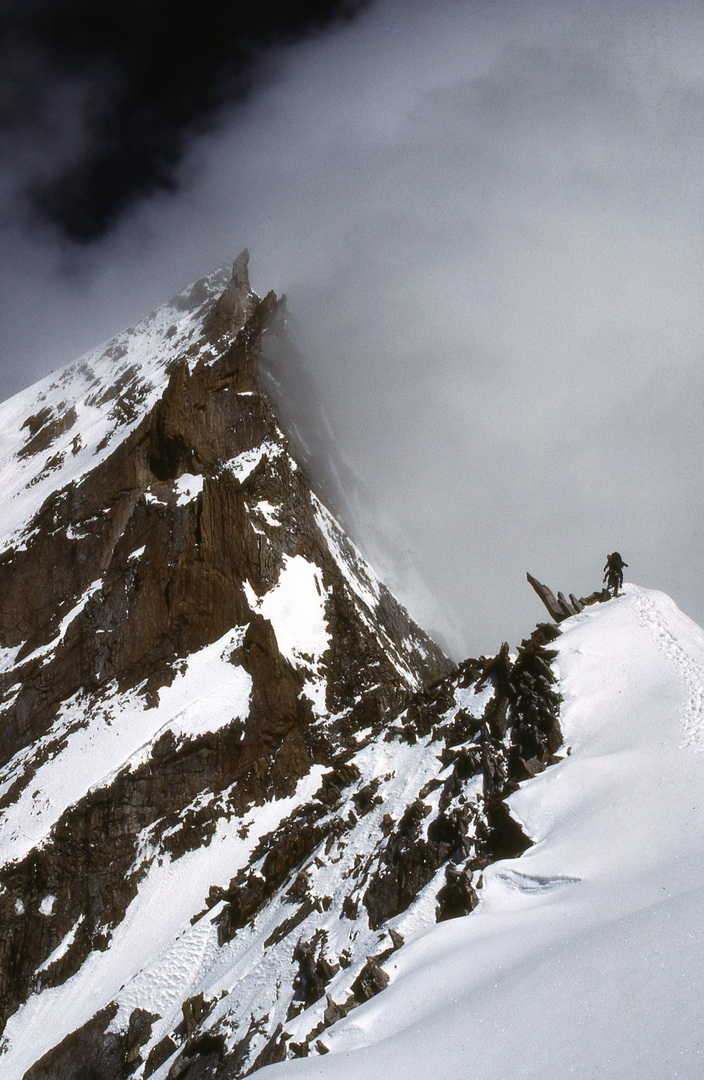 We scurried back to our tents in driving snow.

Over the next couple of days we came down off the mountain, chastised. At the Advance Base, a German climber Ewald Ruff had arrived. He was accompanied by Tariq Ali. They had trekked in from Srinagar over the Margan Pass and were planning to cross over the col into the Kibber Nullah and into Kishtwar. Ruff seemed to lead a charmed life : he had climbed Ama Dablam solo in Nepal. The 53 year old had been coming to the Himalaya every year for the last 29 years, making a living by guiding treks and making telefilms. We watched them climb to the col in six hours on a perfect sunny day and disappear over the top.


Shashi shamed us all into humility as he raced back to Base Camp over the moraines, shod in his favourite leather boots more appropriate to city pavements than to the unstable boulders of the Brahmmah Glacier. We could not keep up with him and were happy to fall back and look over our shoulders to our home of snow and rock for three weeks. The colours of the grass and flowers and leaves was like a tonic to the eyes,  fed on a limited colour spectrum for too long.

The walk back down the Nanth Nullah was as intoxicating and heady as it had been on the way up: in fact Doc Mohan and I meandered off the track, lost in conversation and soaking in the visual delights. It was getting dark when we groped our way to a gaddi encampment. One of the shepherds offered to escort us to where the rest of the team was spending the night.

The night was cool and starry and I found a great spot under a boulder to snuggle into my sleeping bag. That night was one of the best sleeps I had had on the whole expedition and for this small pleasure I was grateful. A mountain trip is always replete with moments of simple abundance, and I guess this is what drew me back time after time to the hills.

"16 Sept. We trekked down to Haunzar and bathed in the sulphur springs," my journal reads. "...had tea at Sueda, chicken curry rice at the Fauji's stall in Sonder and hobbled into Ekhala in the evening, dog tired after a very long 11 hour day.." A bottle of rum passed hands and spirited debate was initiated on abortion and revolution in India. I refrained from contributing to the first topic for personal reasons: Margaret my wife was already four months pregnant and it had been a tough decision to come away climbing. After the alcohol had subsided, Doc and I slept on the wooden veranda of the Rest House, beautifully located overlooking the Maran gorge. 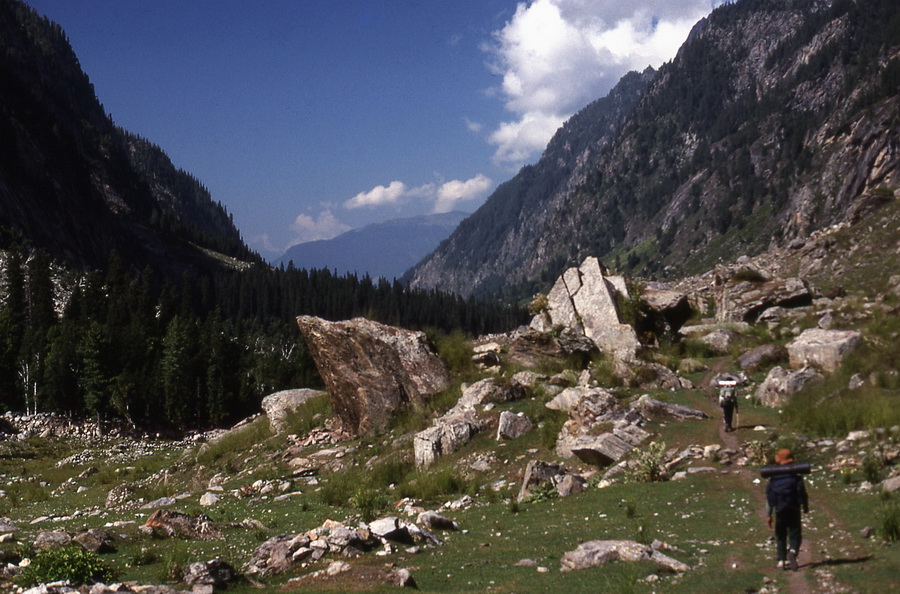 More feasting was to follow at the Patimahal Rest House where the caretaker happened to be Ghani (our muleteer) Chacha's brother: Chicken Curry, rice, chapattis, brinjal curry - all washed down by lots of beer. We almost forgot that just a couple of days earlier our world was above these sensual delights. And we certainly did not give much importance to a curious incident on the last day's walk through fragrant forests of pine. Rounding a bend in the track, we came across two heavily armed policemen who asked us if we had seen any suspicious persons on our marches. We replied in the negative and nothing more was said. The policemen continued up the valley.

A week after we arrived in Mumbai, there was a small news item in the newspapers : "Bomb blasts rock the town of Doda in Kashmir". Terrorism had raised its ugly head in paradise. Brahma the Creator would need the help of Vishnu to sustain the ethereal and magical world of the Kishtwar Himalaya and I was glad that I had paid my personal homage to Brahmmah when I did. 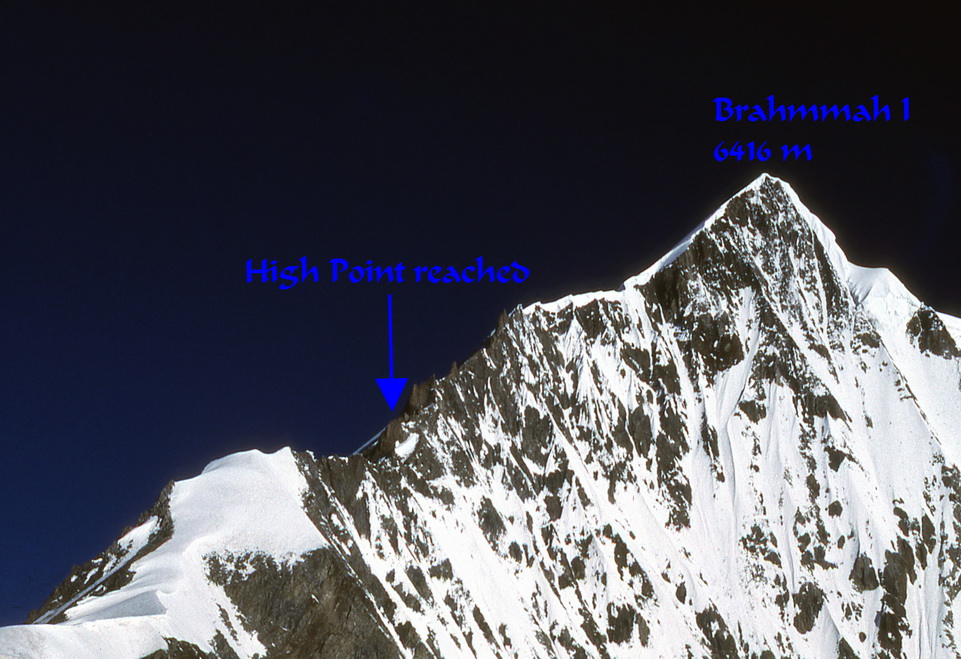 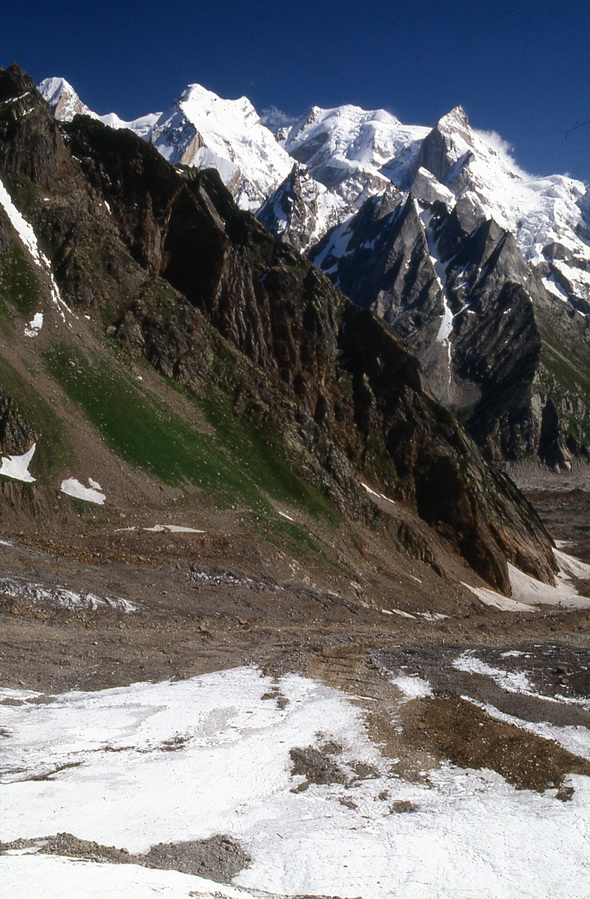 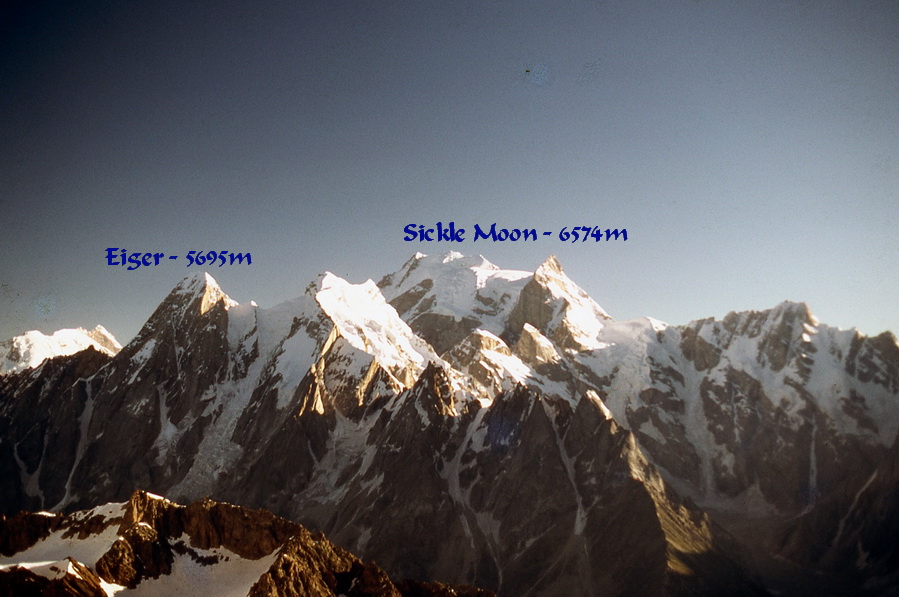 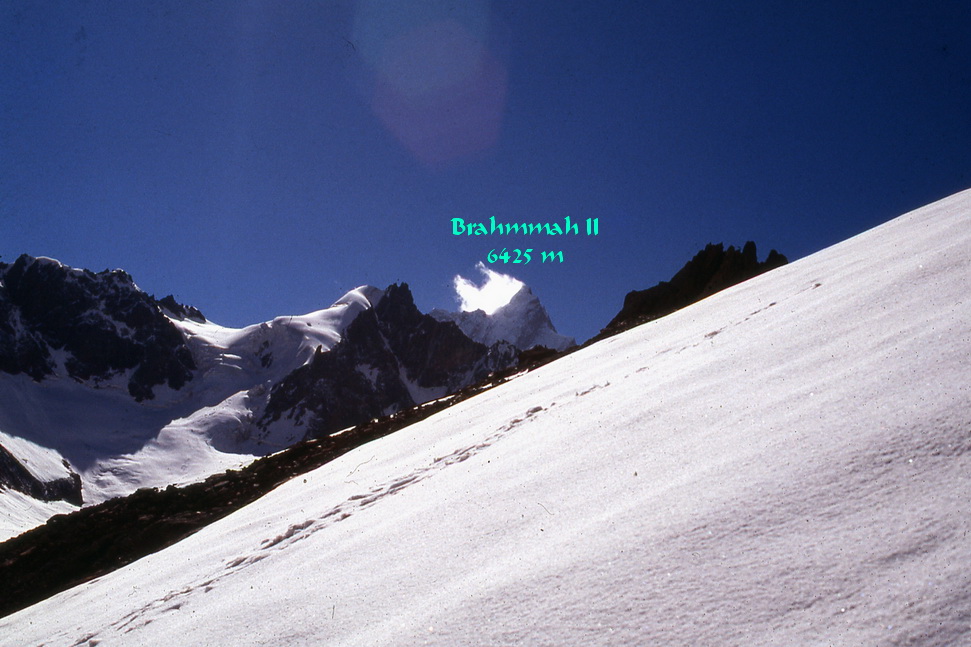 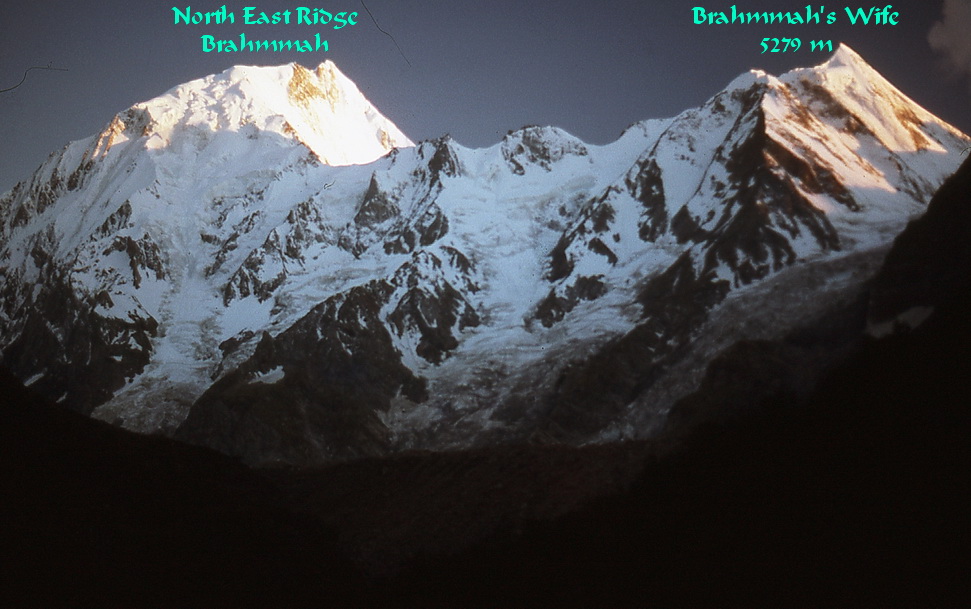 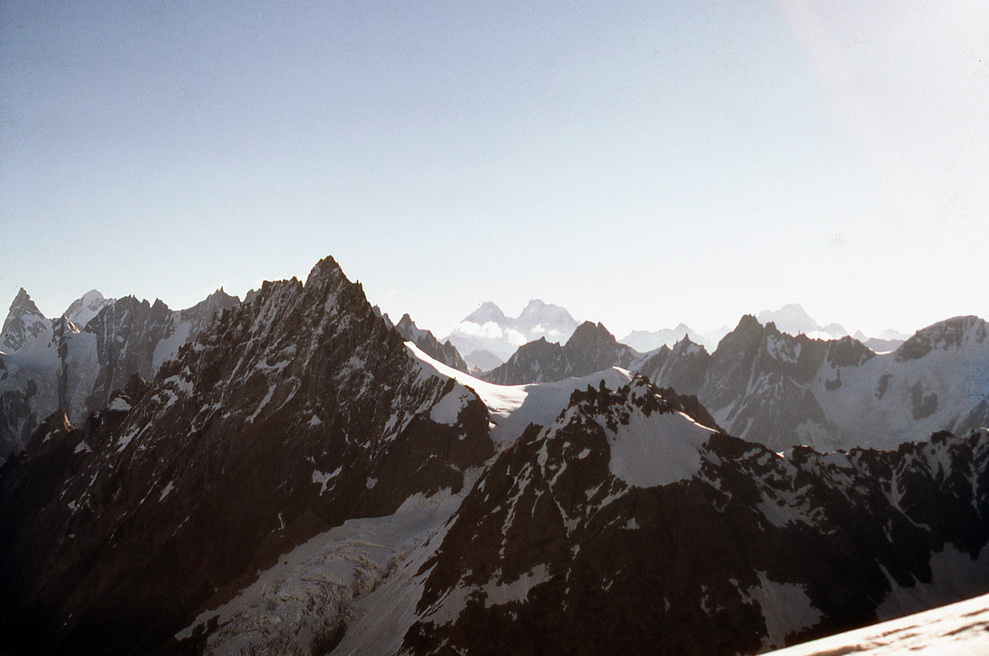 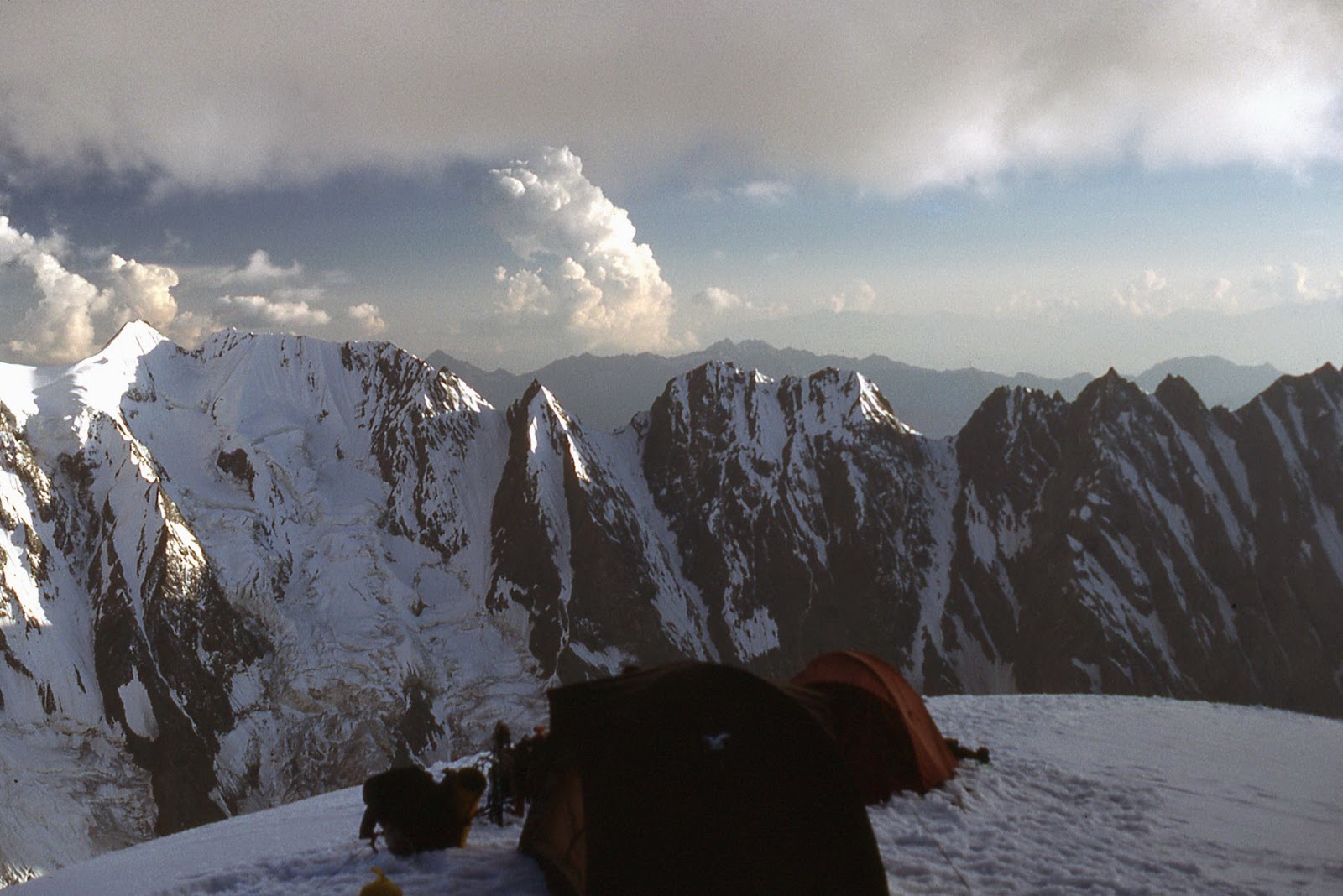